A few days’ mule ride from Piura, in the Province of Jaen, are five very rich and fertile valleys, watered by the Huana, the Cabamba, and the Upper Maranon. In former times more than a million wild cattle grazed there; but their numbers have been sadly depleted of recent years. I am glad to say, however, that the herds are now on the upward grade. As in Bolivia, all unbranded cattle are considered the property of the Government. When I was through this district in 1903-1907, one could buy these animals at £2 a head, and land cost but 1000 to 1500 sols (about £50 to £75) per league. Visitors should take a good gun and rifle with them, for game is very plentiful. Deer, jaguars, pumas, and all manner of fur and feather abound. The best eating bird is, in my opinion, the martinette. Although the climate of the hills and uplands is most agreeable, the valleys near the coast are no white man’s country, for they are unbearably hot. (Only a rough rule or two are necessary to enable one to distinguish between healthy and unhealthy country, almost at a glance. Where coffee, sugar, and tobacco grow is always salubrious. Fever lurks where the ground produces cocoa and rubber.) Very fine coffee is cultivated hereabouts, which compares well with the best Mocha. The addition of a little Costa Rica or Blue Mountain (Jamaica) puts the crowning touch on a beverage fit for a king. The High Flats are wonderfully invigorating.

It is possible to obtain two crops of tobacco every fourteen months, and one of alfalfa every five. The second crop of the latter is better than the first, and the third best of all.

Rubber trees abound in the forests. They are at their best when from twenty-five to sixty years old. They begin producing at the eighth year, Hevea No. 1 yields from 10 lb. to 11 lb. per tree; Hevea No. 2, from 5 lb. to 6 lb. 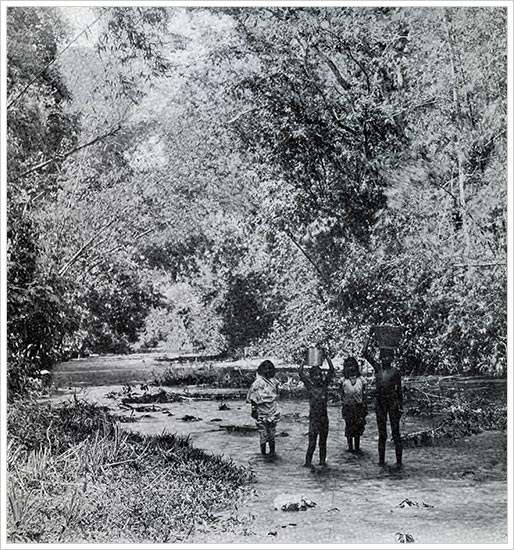 In the forest. Illustration from Adventures in Peru.

Gold is to be found in many Peruvian rivers. One in particular I bear in mind. Some Indians showed me a lot of gold dust they had brought with them to sell at Tumbez and Truxillo. I gave them £200 for a quantity which I resold at Lima later on for £300. They were very decent fellows, and offered to wash for me on the share system; I was to find them in implements, food, etc., plus 1s. per day, and to reimburse myself the cost out of the gold found. This they were willing should be appraised at 6s. per oz. less than the price obtainable at Lima. Half of the residue was to be mine; they would be content with the other half. I should dearly like to take on this proposition with fifty or sixty men. It would, of course, require a bit of capital, for a crowd of that size cannot be fed and looked after for nothing. 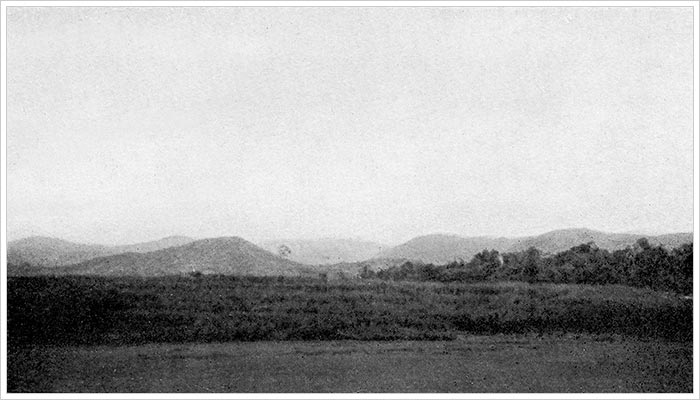 Near Tumbez. Illustration from Adventures in Peru.

The Indian method of cultivating the soil is very primitive. For a plough they use the forked boughs of some hardwood tree, such as the pouie tree—as in Inca times. The only difference is, that whereas in the old days a team of Indians used to do the donkey work, now their place is taken by oxen. High Flats and the sides of mountains are ploughed in ridges like Saxon lynchets, big boulders and stones being so placed as to block up the ends.

Because they loved the cold, invigorating atmosphere, the Incas built their castles high up on the hills. Round Cuzco granite and ironstone are very plentiful. The Incas were fond of making stone steps up to their houses, and many of these still remain.

In Northern Peru there are immense deposits of salt. This commodity and tobacco are Government monopolies, so one can only buy them in licensed shops.

In the Province of Jaen the Government used to pay 10 dollars (gold) for 69 kilos of tobacco, I was told.

Sugar grown in the fertile valleys is made into rum and chancaca, i.e. native sugar. Chancaca can be bought for 4 cents a pound.