To reach Cuzco, the ancient capital of the Incas, one should branch off at Juliaca and take another train. Here, at an altitude of 11,400 ft., the atmosphere is extremely dry and clear throughout the day, but intensely cold o’ nights. To avoid the risk of contracting fever and dysentery travellers would be well advised not to drink any water without first boiling it, or diluting with a little whisky. The best thing, by the way, to drink in the Andes is old Madeira.

Ruins of the Inca palace of Colcampata of the Manco Capac at Cuzco. Illustration from Adventures in Peru. 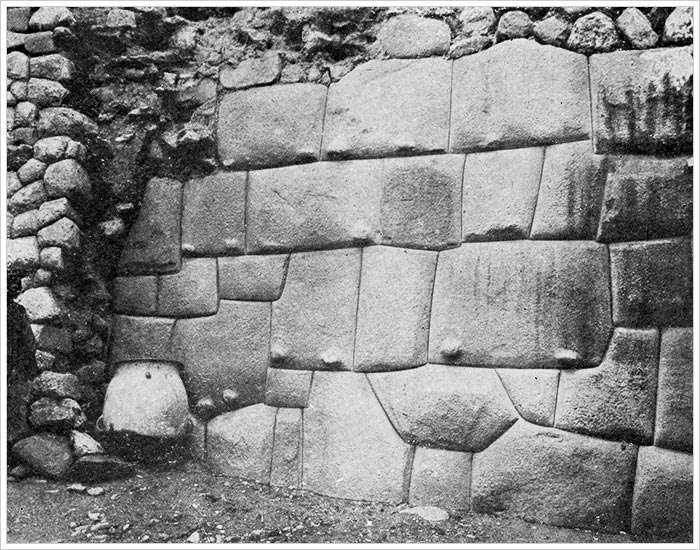 Part of the uncovered Inca wall at Cuzco. Illustration from Adventures in Peru.

About 700 ft. above Cuzco is situated the fine old Inca fort of Sacsahuanan. The illustrations facing page 196 [above] give some idea of the strength of their buildings. Down below stretches the beautiful Huatenay valley. Here almost anything can be planted with the certainty of obtaining most bountiful returns. The soil acts like magic. Some of the loveliest cacti imaginable grow in wild luxuriance. It is said that Humboldt was first seized with a longing to travel when shown some specimens of these amazing plants.

Machu Picchu presents many features of interest to the antiquarian. It was visited in 1911 by an expedition sent from the United States of America, and headed by Professor Hyram Bingham of Yale. Much of the jungle that formerly cumbered the ground has been cleared away, hence the historic ruins are now comparatively easy to view. Machu Picchu is 8200 ft. up, and lies at the foot of a range of mountains bearing the same name, the river running 2000 ft. below. The climate here is simply grand.

Sixteen miles from the coast, round about Payta and Piura, the best pacers in all Peru are to be found. The price of a decent specimen of this famous breed is from 2000 sols to 4000 sols. (about £200 to £400); but for a stallion one must be prepared to pay much more.

The breed originated in the Spanish palfrey, introduced by Pizarro. It is said that up till then the Indians had never seen a horse, and were filled with amazement when one of Pizarro’s men, who had been wounded, fell from his charger. They thought man and beast were one—centaurs in fact. By the importation of the celebrated Koklani strain—the bluest blood of Araby—and high-class thoroughbreds, the pacers have been much improved.

In 1903 I brought from Chile a beautiful chestnut named Dougal. He was by Rodilard out of Clarabella, a St. Mirin mare. Don Julio Subercaseaux practically presented him to the Peruvians as a token of his friendship. I have reason to know his generosity was greatly appreciated by all classes of Peruvian sportsmen. Certainly no horse could be better qualified to add stamina to the famous pacing breed.

Catachaos, six miles from Piura, is a small town where Panama hats are made out of a very fine tough grass which grows in the vicinity. They are very nice, but not to be compared with those manufactured at Monte Christi in Ecuador and Cuenca. On the other hand, they are superior to the hats made in Colombia and Jamaica. The Catachaos hats range from 8s. each to £10. More expensive ones are manufactured, but are only made to order.