From Tipuani to Paroma, Part 10 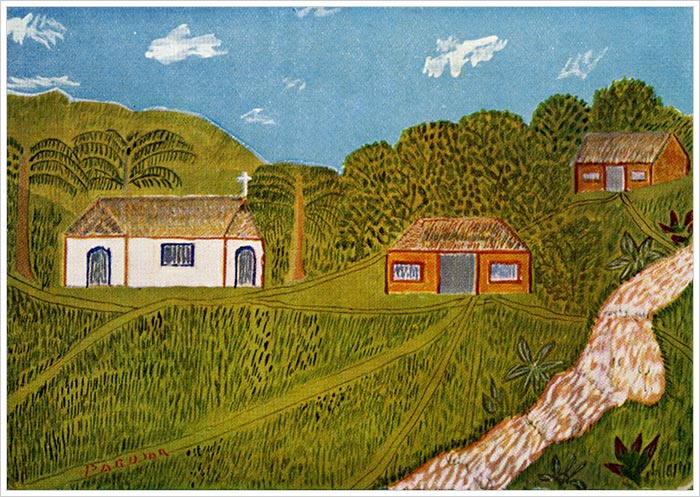 Paroma village, showing the church, the chiefs’ houses and coca plantation. Illustration from Adventures in Bolivia.

At 4 p.m. on the third day after leaving Anhuaqui we reached the famous Indian village of Paroma. It is situated on the top of a green hill, with a river running through it, and houses and huts scattered everywhere about and the large trees that grew singly or in clumps of eight or ten or more made the spot very beautiful. The view was splendid, and you could see for a long distance for miles around. The first thing to catch the eye was a long high shed, built of poles and roofed with big palm branches; this was the Court House, and not far off stood a nice little church. I stopped and went inside and found fresh flowers in all the vases and empty bottles, and the whole building swept clean and kept in perfect order, though there was no priest and had been none for a long while.

I was taken to Villarde’s house, not far from the Court House and church, which stood high up on the banks of the river amongst enormous boulders and deep pools that reminded me of bonnie Scotland. That evening Villarde and I had a long talk. He told me that since he had received his sister’s letter about me and had sent word to her that the Cacique and his people would receive me at their capital village Paroma, some Challana men had returned from La Paz with the story that it was not to facilitate the trading of rubber for the good of their country and its inhabitants that I had undertaken this trip, but quite the contrary was the case. They said that I had come as a spy from the Bolivian Government, to find out what sort of paths they were between the River Challana and Paroma, the depth of the river, the number of Indians as near as could be judged from observation and information, how they were armed, and if there were many rifles and a good supply of cartridges, and that when I had returned to La Paz with all the details they required I was to be despatched again with Captain Cusiquanqui with mules, mountain artillery, and 200 men. This, he said, was the story that the Indians were being told by their countrymen just back from La Paz. I told him of the message that was delivered to me on my way to the Tipuani, and showed him the note of warning, which he said was sent to try and get me to turn back; but when they heard through Cortez that I had got to the River Tipuani the Indians under their Cacique had been consulted, and had told him to let me cross over, into their territory. Villarde said that a meeting of the three hundred head men had been called by the old Cacique Mamani; the first sitting was to take place next morning at 8 a.m., and he would have to put to me all the questions the old Chief told him to ask me, and interpret my reply to him. He told me I would have to prove to their entire satisfaction that the story circulated about me by the Indians recently back from La Paz was untrue. He assured me that Villavicencia, Portugol, the two Fernandez and himself knew quite well I was not a spy for the Government, but he said it would be difficult to convince the Indians, many of whom were ready to condemn me without a hearing; but in the last resort they were absolutely under the control of the Cacique Mamani and his head men, and he had ordered this meeting.

After dinner we discussed the situation till nearly midnight, and both came to the conclusion that this malicious story had been circulated by some of the traders who periodically came down to the river since they knew that, as soon as the Government and the Challana people had settled their difficulties, they would not be able to buy rubber for 100 bolivians, and sell it in La Paz for 228 bolivians; the Company that took over the concession from the Government would soon stop that.

Villarde, of course, knew all about the country, and he told me he had sold a lot of rubber and gold in the sixteen years that he had been here, and showed me a shed near his house that was full of rubber. It appeared that every time he wanted to get away, the Indians themselves stopped him; they would let him go a certain distance, but then he had to turn back. Besides, he could not go to La Paz by the Tongo, as the Government would catch him, and at that time there was a reward of £2,000 for his capture. The way for him to go if the Indians would let him, was down the Challana to the Gy Parana and out at Para. He told me he had made over £40,000.

One thought on “The Famous Indian Village of Paroma”