To know Peru well one must not be content to scrape acquaintance only with her barren coast-line which extends from Payta right away to Antofagasta in Chile—past Areca, Iquique, and Pisagua, all formerly part of Peru. One requires to penetrate into the interior. Her innumerable beautiful valleys and plains must be explored, ere one can form a just idea of this lovely and most interesting country. One has only to journey a very few leagues inland, to enter upon lands fertile almost beyond belief. One needs but to plant and irrigate; the wonderful soil does the rest.

Among the places not too far distant from the coast that one can visit with the expenditure of a small amount of energy, may be mentioned Chupa, Arequipa, Mollendo, Jura, Cuzco, the entrancing valley of Huatenay, and the old city of Machu Picchu.

Chupa—Spanish for “suck”—five leagues from Chala, is a great fruit-growing centre. Here are raised amazing quantities of pipless oranges, grenadillas, cherimoyas, paltas, pines, and bananas, all for shipment to Lima. They are conveyed to the coast on mules and pack donkeys, and then put up in baskets. Living is very cheap. In 1921 one could buy sheep and horses on most reasonable terms. The climate is healthy, and the atmosphere beautiful. One can ride all day long without once touching macadam roads—the bugbear of the prairie lover. The country-folk are most hospitable, and will let one have anything in the way of food and fruit at “rock-bottom” prices.

Mollendo, the port for Arequipa, is 7600 ft. above sea-level, and is noted for its fine and invigorating atmosphere. It is a very clean, healthy town, with a grand old cathedral dating back to Pizarro’s time; and there are some very interesting ruins only a few leagues away. 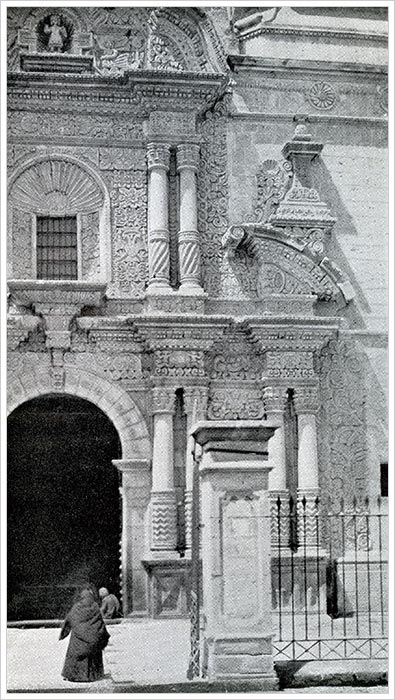 Façade of Campania Church, Arequipa. Illustration from Adventures in Peru.

Jura is but a couple of hours’ train ride from Arequipa. Its noted medicinal baths, situated 9000 ft. up, are fully described in Adventures in Bolivia. What I have said about the remarkable properties of these truly marvellous baths, is only a tithe of the truth. To all I have written about Jura I would add this. No matter what your complaint, never give up hope until you have given her baths a trial.

Besides the cases noted in my Bolivian book, I was acquainted with many more. Not the least remarkable concerned a rich merchant of Iquique, who kept a large ship-chandler’s store, and also dabbled in nitrate. A martyr to rheumatism and sciatica, he had spent a vast sum of money in trying to get some relief from his complaints. He had visited French and English doctors, and had even gone as far as Russia in order to see whether certain celebrated mud baths would do him good, but obtained only negative results.

At last an English doctor said, “Why not try one of the Inca baths Prescott speaks so highly of in his history of Peru?”

Three or four occurred to the merchant’s mind: Canquenes in Chile, some distance from Santiago; Chillan, sixty miles beyond the town of Chillan; Jura near Arequipa, and Lake Huacachina, by Ica. Of these he chose Jura, and made the best of his way there without further delay, accompanied by his wife, two daughters and a man-servant. When he reached the baths, he was absolutely helpless, and was quite unable to walk without assistance.

The party took up their residence in three cottages belonging to the Municipality of Arequipa. (As regards accommodation and fittings, they were exactly similar to Piccione’s at Huacachina, being, as a matter of fact, modelled from his.) These good people remained at Jura three months. Being an Italian, the man claimed friendship with Morosini who kept the big hotel there, and mentioned my name to him. Morosini told me that the first week his compatriot had to be carried to the baths, by himself and the valet. The second week he was able to walk with hardly any assistance whatever; and the third week, to show what great strides he had made towards perfect convalescence, he danced an Italian hornpipe! In celebration of his cure he gave a dinner at Morosini’s, to which he invited all the Italians who were taking the waters.

Morosini advised him to remain at Jura another month to make assurance doubly sure. “A month!” exclaimed the rejuvenated cripple, “I mean to stay another three! Jura just suits me down to the ground.” So he bought a horse for himself, and a couple of the four-nostrilled donkeys peculiar to the district. Thenceforward he and his Chilian valet were always out and about, exploring the country round Jura, potting duck and partridges, or bent on searching out fresh varieties of cacti, which flourish here as if this and no other place was their true home.

These are indeed magnificent. No words could describe the wonderful sight they present to the eye. I used to visit, every day when I was at Jura, their chief haunts, just for the pleasure of gazing on their loveliness. Imagine blooms, bigger than saucers, all a riot of gorgeous colour. Reds, red and orange, bluish mauve, white, yellow, at a little distance they looked like gigantic beds of opals. Altogether I visited Jura eight times. I always went there to get myself in good fettle for my mining expeditions; and I invariably put in a fortnight on my way back from prospecting, to recuperate, previous to returning to England.

Four months really elapsed before the ship-chandler man bade good-bye to Jura. He said he was perfectly cured, and though, since then, he has written Morosini quite a number of letters, he has never once referred to his old malady, so we must assume the cure was permanent.