Tales of the Turf, Part 5

Some twelve miles after leaving Pisco we came across a lovely little oasis, in which there grew the biggest and most delightful heliotrope bush I have ever seen. It quite recompensed me for all the monotonous stretch of desert which we had traversed.

Ica is a charming little town, with houses built mostly of adobe brick, painted blue and white. I put up at a nice little hotel, where I secured, for a very reasonable sum, a room for myself and a shed for Caro and the horses. In the neighbouring district cotton is grown on a pretty extensive scale. Piccione and Co. have a spinning mill here which employs a large number of hands. Piccione himself was a great racing man, and a notable rider “over the sticks” in Italy. I met his good lady and child at Pisco, staying there for the sea bathing. Mrs. Piccione took a great fancy to Golondrina, who was in foal to Springtide, and offered me £100 for her. I said, “You can have the mare if you like; but I want the foal. You can have the mare six months after the foal is born.” This arrangement didn’t suit her. She wished to take over the mare directly I returned from visiting Huacachina. But though we failed to agree, that circumstance didn’t affect our friendship, and when I moved off for the lake I took with me a letter to the caretaker of several little houses P. owned in the vicinity. Piccione had had these built for the benefit of people who go to Huacachina to take the waters, in token of his gratitude for having been cured of a very serious malady.

It was the day after we arrived at Ica, that I rode Golondrina over to the lake. The going was fine until we neared the end of our journey. Then we had to negotiate a hill 3000 ft. high, composed of hard sand. When we had surmounted this obstacle, we had to clamber down another steep path for 1000 ft., and at the foot of this declivity lay Huacachina. 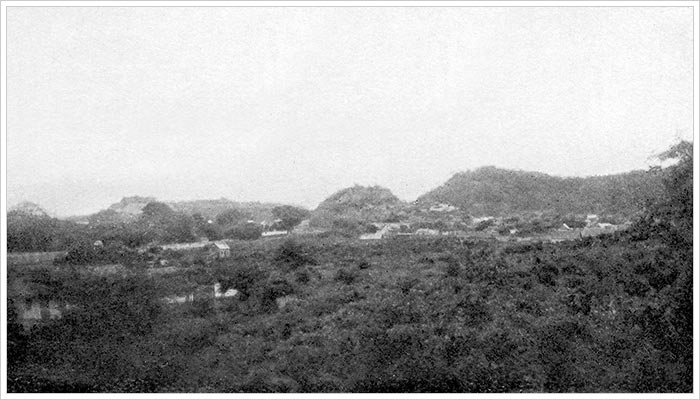 Near Lake Huacachina. Illustration from Adventures in Peru.

The lake is bordered by a tiny beach, some fifteen yards wide. Green trees surrounded it, and a flat-bottomed boat is kept for the use of visitors. Many people of my acquaintance, besides Piccione, have been greatly benefited by a visit to this famous lake.*

I bathed in the lake every day, not that there was anything the matter with me, but just that I might say I had tried the waters. Sulphur, potash, magnesium, and calcium, were, I found, the principal ingredients. One can’t sink, and I could never get farther down than my armpits.

On the surface the water was quite warm, but underneath it struck very cold to one’s feet. That peculiarity, of course, is attributable to the potash.

The country round about Huacachina is noted for its cotton, and alfalfa. Sugar cane is also grown, but it doesn’t succeed so well there as it does along the coast of Peru. The soil is not so rich. Most people picture the desert as a never-changing waste of sand. But when I passed through the Peruvian wilderness, it was all asmother with bulbous flowers of great beauty. The blooms resembled petunias, and they were all the colours of the rainbow. This phenomenon occurs every winter, and continues for a period of six or eight weeks, till the sun regains its full power. Then the exquisite picture vanishes, almost as swiftly as a soap bubble passes away. The desert extends all along the coast. This is Peru’s chief detriment. But even so, it is barred, like the staves of a piece of music, with lovely, fertile valleys, every twenty or thirty leagues or so. In these almost anything that grows can be cultivated with the expenditure of little energy, except cotton and sugar, for these two things require to be constantly irrigated. Nevertheless the sugar mills in these parts can crush sugar every week-day for forty-nine weeks of every year, the remaining three weeks being devoted to the annual overhaul. An admirable system of irrigation has now been adopted, consequently the mills are not dependent on the rain. Saline deposits abound. There are several salt lakes within easy distance of Ica. Borax is to be found farther north, at Chimbote and Pacasmayo.