The City of the Kings, Part 2

Another great sight is the Bull Ring. Here some of the most famous Spanish matadors and toreadors are engaged six months of every year. I knew the principal matador very well. Although an old man—he told me he was seventy-two—his skill was marvellous. He always despatched his bull with one thrust, and not with two or three like some of the less skilled matadors. When the great beast made his rush, old Mariano didn’t run about all over the ring as some do; no, he just turned elegantly on his heel, and then got in his stroke as the bull plunged past him. He made the killing of the animal look a very simple matter, and one of the softest jobs imaginable. Really it is a very difficult operation, and attended with great danger. 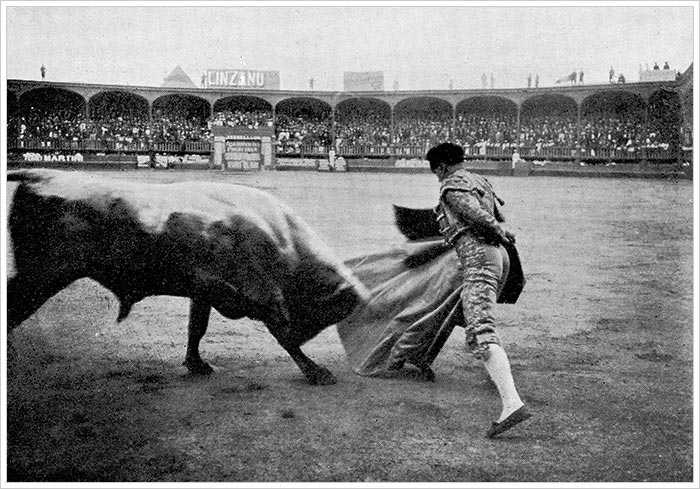 The bull-fight at Lima. Illustration from Adventures in Peru.

Some of the best pacing horses in Peru participate in the Lima bull-fights. The ritual observed at these functions is as follows: When the toreadors, matadors, and horsemen enter the ring, the master of the ceremonies—always magnificently horsed—rides up to the President’s box, and makes a profound obeisance. The bull-fighters all follow suit, the President having previously taken his place, heralded by a flourish of trumpets. Two trumpeters, stationed at the entrance, now sound a blast, the big door of the enclosure beneath the boxes is flung open, and out rushes a fierce beast into the arena. It is an Andalusian bull, one of a breed originally imported from Spain, and is credited with being one of the fiercest creatures on earth. If one shows any lack of courage, he is hooted out of the ring. A bull, in 1900, cost 700 sols, i.e. £75. It is doubtful whether its value has increased since then in the same proportion as a sheep at Lambourn, Berkshire, England, where a local butcher tells me he now has to pay £7 10s. for what used to cost him 37s. 6d.

Bull-fights are often condemned as dangerous, but in most of the rings in South America the fighters are so adept that although they ride close up to the bull, and excite him to fury by flaunting a red cloth, it is seldom that they, or their steeds, sustain any hurt. The only ones who get into the wars are the new, or raw hands.

In my opinion Mariano was the prince of all the matadors. He was a great lover of pacing horses and Cleveland bays. He used to ride a fine pacer, and was often to be seen driving a pair of Clevelands that he had bought at Milton’s yard in London. He told me that he had retired from the ring ten years before I saw him in 1900; but was obliged to return to the scenes of his former triumphs, because he found it so difficult to teach would-be matadors how to act. They wouldn’t study hard enough to suit him; and when in the ring were inclined to rush matters. Mariano, on the contrary, took things very coolly. Nothing seemed to ruffle him. He was indeed a champion. Every year a big silver shield is presented to the owner of what is considered the best pacing stallion that has participated in the fights. I was present on this gala day, one July, when the awards were made. The principal prize, on this occasion, went to a beautiful chestnut horse that had one white leg, and one white foot, and also a white star on his forehead. The present very popular President of Peru, A. B. Leguia, then Minister of Hacienda, sent him as a gift to George Lockett, one of the principals of the British Sugar Company, a man noted for his fine four-in-hand of greys.

The tickets of admission to the bull ring are 4 and 5 sols, i.e. 5s. and 10s., for seats on the shady side of the arena. For those on the other side (which are exposed to the blazing sun) 2 sols or 2½ sols, i.e. 4s. or 5s., is the charge. Boxes are £2 or £4 each, and orchestra seats, 10s. (There are no boxes on the sunny side.) I rather favoured the latter, but frequently was honoured with a seat in the President’s box.