And so we say goodbye to Bolivia and to Adventures in Bolivia, Cecil Prodgers’ first book of travel memoirs. The book was enough of a success that he quickly wrote and published a sequel, Adventures in Peru, which will appear here soon. A third book of horse-racing memoirs from Chile was sadly never published.

Searching online for traces of contemporary reviews of Adventures in Bolivia turned up only part of a five-book review of travel writing about South America in the New York Times, reviewer unknown. I’ve reconstituted it from the abstract and from an OCR version of the original page, which involved some guesswork for a few garbled words. The $50,000 figure is based on a conversion rate to pounds sterling of approximately five to one in the early twentieth century. 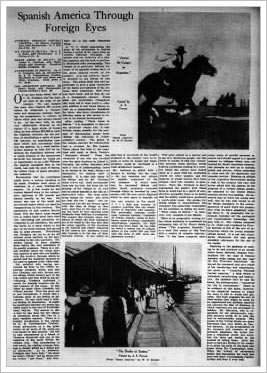 Of the five books listed, that of C.H. Prodgers hits the highest note in the scale of adventure. We can imagine this man, who weighed 265 pounds before he undertook a venturesome and dangerous journey, making his preparation to venture in where white men had always feared to go. As the story tells, he was very comfortably situated as the trainer of a large stable of horses when he was offered $50,000 to enter the Challana territory for the purpose of establishing a spirit of good-will between an exploitation company which had concessions there and the natives. In a most matter-of-fact manner he tells how he undertook the hazardous journey, not so much because of the honorarium involved, but because he would get an opportunity to see Lake Titicaca, the highest navigable lake in the world, and visit the peak of Sorata, the ultima thule of much adventurous endeavor.

Recognizing that his avoirdupois might prove a serious handicap in his quest, Prodgers went about its reduction in a most business-like manner. In a few weeks he had worked himself down to the comparative lightness of 235 pounds and started merrily on his way. His mount was one of the small but sure-footed mules which are used for transportation in this territory. The appearance of this modern Sancho Panza with his heavy torso draped over a mule’s back must have been very interesting, and genuinely entertaining to all beholders; his pack was borne by a horse which in the days of his horse training had served him to some purpose. Everything that Prodgers set out to do he did without much exertion on his part, according to his own narrative. Obstacles appear to have tumbled down before the very assurance of his goodly presence. There is a certain modesty about the whole story that appeals to men who are familiar with the country through which he passed and the suspicion directed by the natives against every white man.

Not satisfied with having performed his duty to the rubber exploiting company which sent him into Challana and with having seen the things which formed part of the urge which sent him forth on his adventuring, Prodgers undertook a search for missing treasure, the fabled treasure of the Incas. In this effort he made three attempts, but without success. Were the story not so real throughout, it would find a welcome place in the fiction of adventure. No one could read it without feeling its fascination. It might be questioned whether the writer has added much to the sum of knowledge about Bolivia. The answer to this is that he has done the few things he attempted along this line in a most readable manner. There is a lengthy introduction to the volume by R. B. Cunninghame Graham, whose adventures as a big game hunter in all parts of the earth are well known in this country. He will be best remembered as a friend of Theodore Roosevelt and one of the members of his party during his African trip. The introduction is well worth the reading because Graham is doubly gifted as a writer and an adventurer. As he intimates, Prodgers may have been “too stout for active virtue,” but he shows how one writer “got there,” and that, after all, is the most important thing.