José Maria, Zam and Manuel’s wife were waiting down below, and we pitched camp there for the night. Next day, after nine miles of fairly level going up the river, we got to the foot of the Caballo Cunco Hill, where José said the treasure was buried. I pitched my two tents and kitchen on the level river beach which is about half a mile wide, and extends all the way up and down the Rivers Cato and Sacambaja, and Manuel ran up a rough shed for the mules to feed in, and another for himself. There was plenty of wood all over the beach, and the forest all around was full of fat wild cattle. Near the camp just inside the forest was a clear stream of water with some deep pools, and there were plenty of guava trees in the forest. The big Rivers Cuti and Sacambaja were only two hundred yards away, but their water is not very good to drink, as the broad sandy beach is full of nitrate. José Maria told me that in the rainy season, which starts down here in the middle of October, these two rivers form one big sheet of water; the Caballo Cunco Hill becomes an island, and the water is so deep and the current so strong that no one can cross for weeks and months at a time. 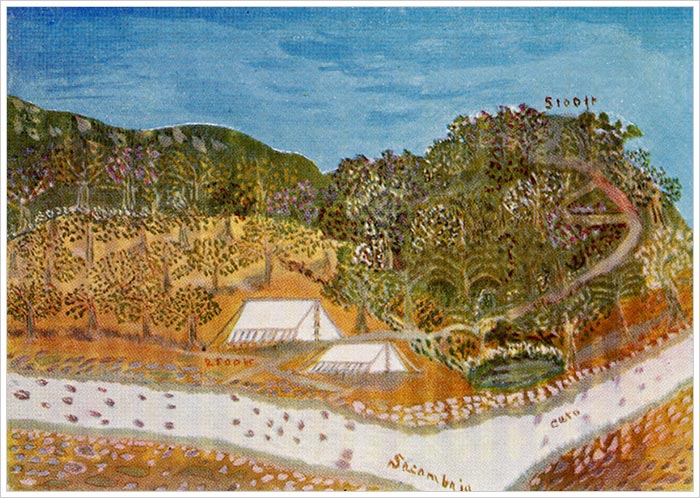 The camp at Sacambaja and the Caballo Cunco hill. Illustration from Adventures in Bolivia.

José Maria was too old to walk up the very steep path which could be seen leading up to the top of the hill where the big stone was. Next day I went up with Manuel, Zambrana and the two boys, all carrying machetes to clear the way. At the top I found the big stone shaped like an egg, and on looking to right, left and behind we saw the Rivers Cato and Sacambaja down below, running into one main stream. The scenery was exactly as described by the paper in my possession. I took the exact position of the hill, and at once sent Zam to inform Don Lisandro Mendizabal, who lived at Cuti, twenty-seven miles off. The nearest house was José Maria’s, eighteen miles off. Through Don Lisandro I sent my application to the Government in La Paz, who two months later sent down one of their officials with six soldiers to give me the documents of formal possession. These documents still hold good, and are in my possession, signed by the Minister of Mines, and witnessed according to law.

It may be of interest here to give the rules issued by General José Manuel Pardo regarding tapadas (hidden or buried treasure).

A tapada shall be the property of the finder provided he comply with the following conditions:

The finder must not absent himself from the spot even for a day until he has been given formal possession. He must notify the owner of the soil, if it has an owner. The finder on finding buried treasure must at once notify the authority appointed by the Government of La Paz, who will at once inform the supreme authorities in La Paz; they will despatch a detachment of soldiers and one or more mining engineers to take out the buried treasure, which will be divided up in La Paz, 25 per cent going to the Government and 75 per cent to the finder.

The owner of the soil may participate in one half of the finder’s share, provided he comply with the following conditions. Six weeks or forty-two days after the authorities have been notified, he must present himself at La Paz, and give information. He must then within the time specified render assistance to the finder by providing, paying and maintaining thirty men to uncover the tapada. If he fails to comply with these conditions within the time allowed, namely, forty-two days, he loses all rights.

Keeping my saddle mule down here to use when wanted, I sent Manuel with the horse and the other animals up the valley where the grass was good, telling him to come down in a week’s time for more provisions. José Maria wanted to make himself useful, so I gave the old man the job of bringing down a 4/- sheep and 2/- worth of potatoes every Saturday. One day I asked José how old he was, and he replied he did not exactly know, but was certainly several years over one hundred. He said his father told him the convent was completed in 1705, but in 1745 the Jesuits abandoned Sacambaja, knowing they were going to be expelled from Peru. The remains of the convent, several other buildings, some stone mounds, and the great mud and stone wall still exist.

I started off the excavation by blowing the big, egg-shaped stone to pieces with dynamite. The stone was exactly ten feet high above the ground, five feet below, and fourteen feet wide round the middle. The roof of the cave was covered over by earth and grass for eighteen inches or two feet, except at the end where the big stone was, where it was covered rather deeper. The roof itself was divided into three equal squares, each twenty-five feet long, and the whole roof was, as far as could be judged, seventy-five feet long and thirty feet broad; it was covered all over with stone, cut and shaped like bricks, and large slabs of big slate stone. The partitions were divided by stone bricks, six inches high. All the work was very well and carefully done. After we had exposed the roof, the question was, which side to tackle first. Eventually, I decided to make a start on the south side. Mendizabal, who always took, and still takes the greatest interest in the uncovering of the top of this hill, had sent me a reinforcement of three Indians, or colonias as they are called, whom I paid 1/- per day, and their food, and I replaced Manuel’s son by Manuel himself, letting the boy tend the animals. This made four men and a boy, and myself for the work. We started at 7.30 every morning, and dug away for all we were worth until six o’clock at night, knocking off only from twelve o’clock to one o’clock for the cold lunch and water which we carried with us.