In this same Nasca valley, where the Yungas ruins lay, I several times noted the vine which the Indians use in the concoction of their famous and most deadly poison called Wourahli. Practically all the Indian tribes of South America are well versed in its manufacture.

Various plants and insects enter into its composition. The vine, which furnishes the most important ingredient, has a grey-coloured stem that bears fruit something like an apple, containing bitter seeds. In 1903 I gathered some of the seeds intending to take them home, but on my way remembered the Father’s cautionary words, and so threw them away. I should add that this vine has a very pretty yellow flower. Another ingredient is supplied by a vine bearing a small blue flower. The root is crushed, and steeped in water four days, until it is all of a pulp. The crushed seed of the first vine, together with its roots, scraped fine, are then mixed up with the pulp, and the whole is boiled for five hours. The shavings are next removed and thrown away, and the residue allowed to cool. Now some crushed Tucandiras ants are added. The mixture is boiled for another twelve hours, and is then ready for use.

This is the poison into which the Indians dip their arrows. It is so deadly that its effect is almost instantaneous; yet it does not render the flesh of any animal at which it is aimed unfit for human consumption! The Manjeroma Indians of the Putumayo district use it against strangers, or Indians of other tribes, should they attempt to abduct their womenfolk. 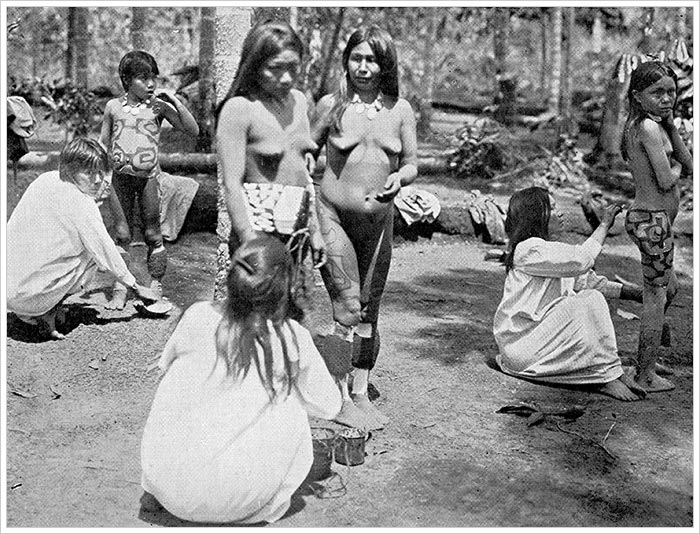 Indian girls of the Putumayo River being painted in preparation for a tribal dance. Illustration from Adventures in Peru.

I did not notice any specimens of the second vine in the Nasca valley, nor any of the ants. (I scraped acquaintance with the latter at Sacambaja later on. They are about 1½ in. long, the males being black and the females brown.) But I often came across in the valley a fly that was a rotten nuisance. It simply delighted in laying its eggs in any clothes exposed to the air after being washed.

A species of wild dog was pretty common in this locality. I should say it was a cross between a wolverine, or lynx, and a native dog. Similar ferocious animals are found in Patagonia and Tierra del Fuego.

As might be expected, fireflies existed in myriads, and there was a certain mysterious thing, whether insect or animal I cannot be quite sure, that emitted a very bright light, far greater than the light the fireflies produced. The Indians called it the electric rat. I tried hard to get a specimen, and deferred my departure for twenty days in order to do so (and to further examine the ruins), but I never touched lucky, although on several occasions I saw the mysterious light moving about after dark in the thick bush, or forest, and fired at it more than once.

Padre Francisco told me the Indians use a hair wash made of quassia bark and hard brush-wood growing on the lower slopes of the Andes. Mixed with scent, it is sold now by many barbers. I tried this concoction in combination with other ingredients, on a horse that had the itch, and it proved wonderfully efficacious. Once when I journeyed home to England, I called at Elvaston Castle, and found Lord Harrington’s nice retriever was suffering from scabby itch. I tried the hair wash on the dog, with such good results that it soon afterwards won first prize at a big show. A friend of Lord Harrington told me the following year that he had used it on his own head, and it made his hair grow splendidly.