Through the Nasca and Cañete Valleys, Part 5

I thought it best to tell the Corregidor and priest why I could not very well stay with either of them, viz. because I had to examine the old viaduct for Jackson and his pals, and I was glad to find they both appreciated my explanation. The priest told me that a little lower down the valley there were the ruins of an old city, dating back to the time of the Yungas, the oldest known inhabitants of the Southern Hemisphere, who ruled Peru in the far distant past, long before the Incas came into prominence. That the Yungas had attained to an extraordinary civilization is shown by various specimens of ceramic art which have been brought to light in recent years. Vases, basins, and water-bottles have been found, exquisitely moulded and baked, made of an opaque clay, faintly tinged with pink, and covered over with a wonderful enamel, on which various designs are vividly represented in colours, which still retain their original freshness. Among the most treasured objects in the British Museum, are four pieces of this ancient pottery, dug up in this same Nasca valley. Three bowls and one basin are intact. There are, besides, some broken specimens. Experts fix the date of their production as 4500 B.C. The Yungas water-bottle (p. 138 of Adventures in Bolivia) was unearthed here. It is much larger than the British Museum specimens. Although after them the Huancas, and later on the Incas, tried to imitate this beautiful ware, all their endeavours were nothing worth, and to this day the potter’s secret remains inviolate. 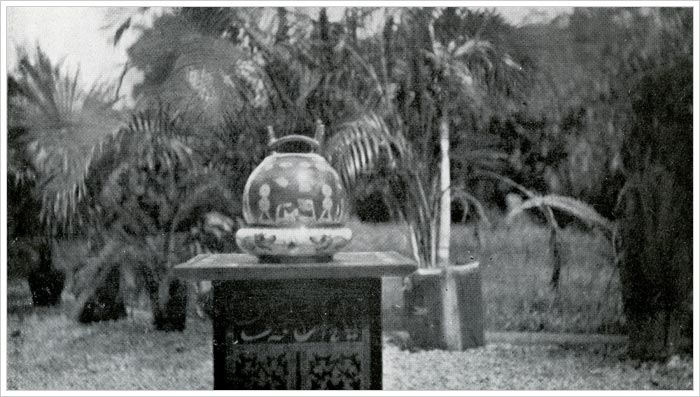 Yungas pottery recently discovered in Bolivia, said to be 6,000 years old. Illustration from Adventures in Bolivia.

I stayed in this locality seven days, during which time I examined the old Inca bridge and viaduct very thoroughly. The priest and the Corregidor came down every day, and generally brought several Indians with them. I used to wait for them on the bridge about 9 a.m. The Priest, who had made a special study of everything relating to the history of the Incas, told me quite a lot. I tried several times, without success, to measure the bridge accurately, but was unable to do so, on account of its dipping every few yards. It shook under my weight. On one side it was fastened to a big rock, and on the other to a wall built up of boulders and stones. It was kept in good order by the Indians who lived in the villages on either bank of the river, under the direction of the Corregidor and Father Francisco, my good friend the priest. The latter told me there was a similar bridge at Desaquadero* on the Bolivian side of Lake Titicaca. (I subsequently visited Desaquadero several times, and on one occasion camped there three days in a hired hut. The Indians were most kind to me. The one who let me the hut had two very nice daughters, who cooked and did for me. Every morning they brought me fresh fish, and fruit, and attended to my comfort. With my gun I enjoyed rare sport among the flocks of wild duck and flamingoes that frequent this entrancing spot.)

The old bridge over the Appurimac was constructed of stout planks, lashed together with fibre, supplemented by tough steel hawsers provided by the Government. It was supported by big stone pillars reinforced with heavy hardwood logs and weighty baulks of timber. On each side of the bridge was a stone path. The whole structure was raised about twenty feet above the banks of the river. Originally it had been covered with fibre matting; the hawsers had been added in recent years, in lieu of those twisted of Beluco creeper. This plant, by the way, often grows as thick as a ship’s cable.

At this point the Appurimac is only about a hundred yards broad, and the shallow water is full of rocks and boulders. But it gradually broadens out and gets deeper as it continues its course right away to Lima.

I lunched with the good padre one day, and enjoyed the meal very much. It consisted of guinea-pig stew, washed down with nice cold chicha. My friend the Corregidor saw to it that I never ran short of provisions. The Indians supplied me with two bottles of goat’s milk for one shilling. A fat fowl was obtainable for a similar sum. A sheep cost four times as much. Fruit was equally cheap, and the valley simply teemed with game. The Indians said there were plenty of wild pigs, but I never came across any.

One day, while walking near the river, on the look out for martinette, I saw a brace of lovely gold and silver pheasants. But they looked so beautiful I hadn’t the heart to kill them. Humming birds I met with, and also bright green parrakeets. The latter nest in sandy cliffs, or where gravel is plentiful.

I had little time to give to prospecting for gold, but the Indians said they frequently washed some out. One day after they had taken off the top soil, I panned out a little gravelly clay, and found colour. I had only half a day at it, but in that short period I collected nearly half an ounce of straw-coloured gold dust. So the metal is evidently there in paying quantities.

This valley was full of marvellously lovely flowers. Here and there one met with catteleya orchids, some white, some pale blue, some mauve. I didn’t notice any of the scarlet variety. According to Broadway, the Trinidad Botanical expert, and Freeman, the Minister of Agriculture for Trinidad, B.W.I., the white catteleya is rarer and much more valuable than either the blue or the mauve. They held the scarlet in very high esteem. It is very seldom seen. Here also was to be found, growing in wild profusion, the exquisite Peruvian maidenhair fern. In colour it is a delicious, dark olive green. Many specimens were close on three feet high. Broadway told me there is nothing to touch it as a house fern. I have known Trinidad since 1902, and have seen the same Peruvian ferns, year after year, in the fernery at the Botanic Gardens of Trinidad. They never seem to fade or wither, but always look first rate. President A. B. Leguia has a large number of these beautiful ferns growing near the entrance of his magnificent private palace at Lima.