I decided to break my journey at Tia Huanaca, where I got a very nice room at an Indian’s house. I catered for myself and the Indians whom Rameres had procured for me. (They were to be disbanded at Huaqui.) My object in going to Tia Huanaca was to search for Inca relics. All the land round here, right up to the lake, belonged to my good friend and patron, General José Pando, President of Bolivia. He gave me permission to explore, prospect, and excavate anywhere on his property where I thought something of Man’s handiwork lay hid. The only conditions he imposed were, that I should prove to his satisfaction that I had sufficient capital to employ the requisite number of men, and that I would let him see whatever was uncovered during the operations. Pando himself wished to share in the profits, or losses, of the transaction, and thus was prepared to fulfil the obligations imposed by the Mining Laws.

I spent a week in one of the houses belonging to the head Indian of the district. It is his son who is seen standing alongside the colossal statue represented opposite page 84 [below]. The old Indian’s name was Pablo Guiterez. He was full of information respecting the ancient remains that are to be met with on every side. The principal were called, so he told me, the Ruins of the Gentiles. 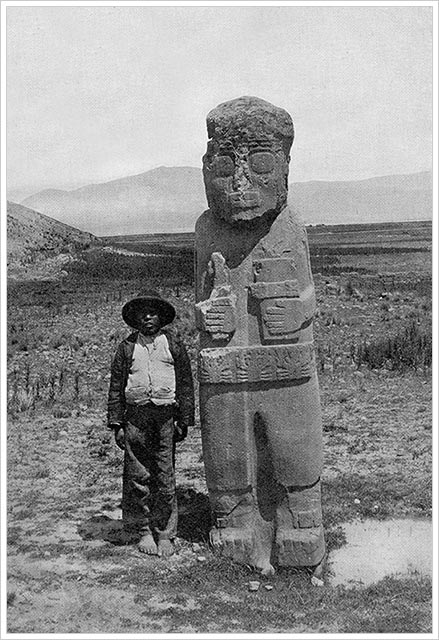 Remains of pre-Incaic civilization near the ruins of the Gentiles, Tiahuanaca, Bolivia. Illustration from Adventures in Peru.

It must have been originally a stupendous place, this ancient Peruvian palace. The inner courts are 360 ft. square, and composed of tremendous stones, some of which weigh 60 or 70 tons.

According to well-known authorities these buildings and the big images—which are carved out of the solid rock—were anterior to the time of the Incas. They are very similar to those one knocks up against on the sacred island.

Day after day Pablo and I, and his two sons, and two other Indians used to ride over to some old forts about five miles distant from his house. There were natives living close by, as was indeed the case with most of the ruins we visited. As a consequence I was often able to purchase relics they themselves had come across. Among many items of interest that I acquired at Tia Huanaca, was a card case of delicate filigree work. This was a personal gift from Pablo. It is a delightful example of the silversmith’s art.

Besides the forts, we visited numerous other likely places. Sometimes our luck was in, sometimes it was out. At one spot that looked very promising, we dug away for two days and found nothing. We were more than compensated for this disappointment, however, by a nice little find that we made when striking across country towards La Paz Alto. Whilst we were engaged upon a mound Pablo had pointed out, we hit on what seemed like an old well. Before we gained access to it we had to remove a lot of big stones, and finally a pretty large slab of slate. After that we dug down a good five feet or more through loose earth and stones that packed the steyning of the well, which was very nicely built of stones and bricks, intermixed. At the bottom of the hole we found a bag of raw cowhide, similar to those made by Indians of to-day around Jumbez and Titicaca. It was sewn together with leather thongs, and the hairy side was outside. There is no doubt this kind of bag is much handier than the ordinary valise for travellers in the bush. The one we found was black with age, but for all that, in fairly sound condition. Inside it were a number of old silver ornaments.

When I told General Pando of our good fortune he said, “Keep the lot, my boy, and try and form a company to take the matter in hand on a big scale. I shall get Pablo to fossick about and find some more relics for my own collection.” This was very good of him; it gave me a fine start and encouraged me to acquire other specimens of ancient art work. I laid out £100 with Don Pablo, paying him at the rate of half a crown an ounce for old silver articles that he had dug up from time to time. Altogether I rounded up a nice little lot. 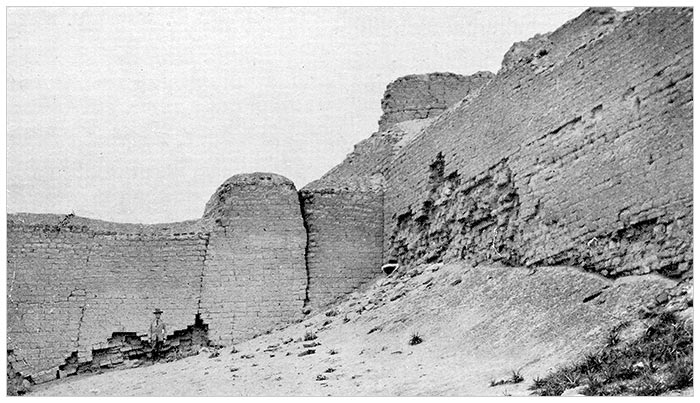 The ruins of Pachacamaca, near Lima. Illustration from Adventures in Peru.

I took toll from Inca ruins in other places besides Tia Huanaca, e.g. at Pachacamaca I lighted on many interesting things, manufactured of silver and gold. Amongst the most notable were a miniature lady’s slipper, artistically fashioned of silver filigree, and a marvellously fine model of a soldier in solid gold. The uniform depicted is very similar to that Pizarro’s men used to wear. It stands about three inches high, and the plinth is encrusted with brilliants. I had my father’s crest engraved on the base and gave it to him. At his death it reverted to me. After selling £700 worth, I still had a tidy lot left over. Some of these I distributed among my friends, but the majority I gave to my parents, who had two tables set apart in the drawing-room at Kington, upon which they were displayed, and very proud of them they were.

The specimens I retained for my own pleasure would delight the heart of any student of antiquities. At times I am inclined to regret having parted with so many choice relics of old-time civilization at bargain prices, especially when experts call me an old fool for my pains, but still the satisfaction of finding them was worth the sweat, and it isn’t as if there were not plenty more where they came from.

Among the many interesting things I collected were several stone axes, and one made of tempered copper. I am one of the very few men who know the Inca secret method of tempering copper. The tools they and the Aztecs manufactured from this metal were keen as any made of the very best steel.

It was very cold here at night, and, like Donovan, all the inhabitants seem to consider a fire quite unnecessary. The atmospheric conditions were very similar to those I encountered in the district of Tres Cruces. During the daytime one didn’t notice the cold so much, because of the brilliant sunshine; nevertheless it was freezing hard all the time. It may seem strange, but it is a fact, notwithstanding, that at Cerro Volcan and Cerro San Pedro, two peaks on one side the great Atacama desert, a thermometer placed in the shade would register three or four degrees below zero; and when shifted not a hundred yards into the sunshine, would run up to seventy-five degrees above. On one or two occasions my instrument registered eighty degrees. This was in 1921, when I went to collect samples of the beautiful Chinchilla pelts, with a view to opening up business with several of the leading furriers in London.

One thought on “Inca Treasures”